Based on our understanding of the Quran and Sunnah

Based on our understanding of the Quran and Sunnah, the Islamic Labour Code is the prototype legal instrument, ready for adoption or adaptation by governments in Muslim countries as well as progressive enterprises worldwide, willing to embed Islamic teachings in their organizational cultures. The ultimate aim of this work is to raise awareness among the masses, especially the practitioners of labour law, industrial relations, human resources as well as those working with the legislative bodies, about Islamic injunctions on employment relations. While rooted in Islamic teachings, the work does not claim any religious sanctification and is well aware of its limitations.
Read Now 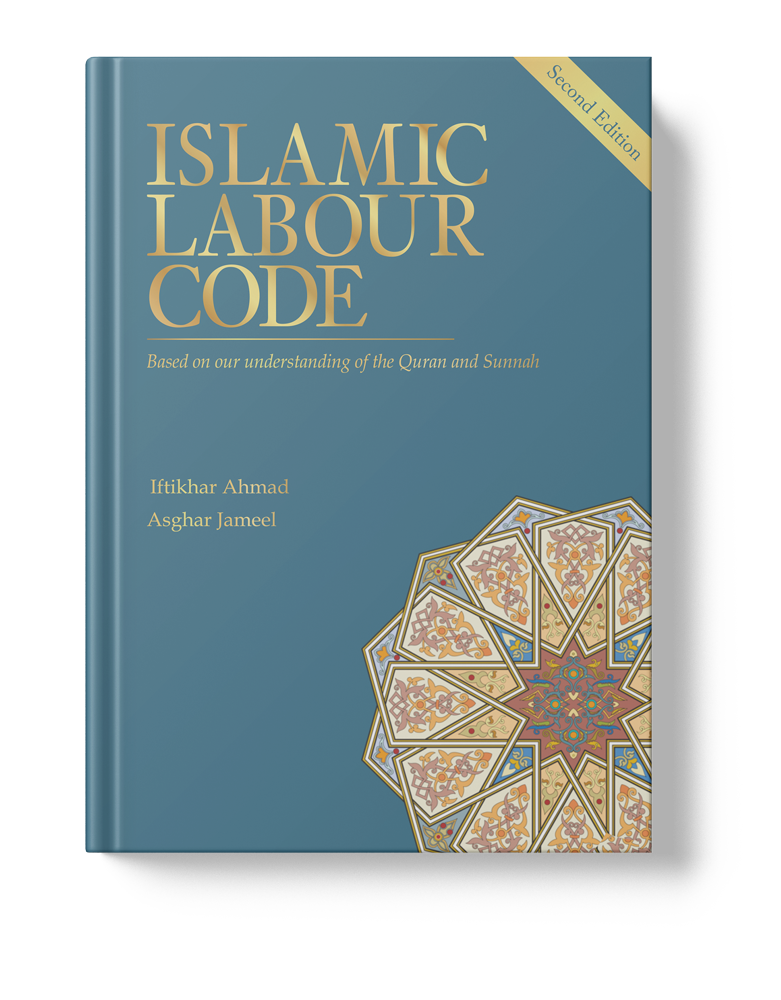 Of the 3.5 billion global labour force, nearly a billion is Muslim. And most of these one billion workers are living and working in OIC countries, the 57-member block of Muslim countries. While Constitutions in these countries do refer to Islam and Islamic principles, the state of labour rights, even de jure, is dismal. This is particularly worrying as labour law is the only field of law that encompasses the entire spectrum of life, from birth (e.g. maternity and paternity leave for parents) to demise (funeral grants and survivors’ benefits).

Islamic Labour Code is a prototype and a work in progress, based on the teachings of Quran and Sunnah. The proposed Islamic Labour Code provides insights into Islam’s view on equal treatment of workers, irrespective of sex, religion, and race, etc.; prohibition of sexual harassment; right to unionization and collective bargaining; the abolition of child and bonded labour; occupational safety and health; and the right to social security.

At a time when the Scriptures and the Prophetic traditions are frequently being misquoted to deprive people of their rights, this work aims to set the record straight. It shows that the Quran and Sunnah protect and promote labour rights.

The current pandemic has proven to be a catalyst, and a big global reset is evident in every aspect of life & society. Labour laws in Muslim countries desperately warrant an overhaul too. We hope this work can provide the basis to Governments in Muslim countries, organizations and individuals for a reset of their labour rights practices and beliefs, aligning them with the spirit of Shariah.

We draw on our collective experience of the last 15 years in comparative labour law and human resources to compile this work and earnestly hope that it will be used not only by governments to reform their laws but also by progressive enterprises to give workers their due rights in the light of Islamic teachings. The ultimate aim, however, is to raise awareness on Islamic injunctions regarding the subject. While rooted in Islamic teachings, the work does not claim any religious sanctification and is well aware of its limitations.

Islam, derived from the Arabic root “Salema”, means peace, purity, submission, and obedience. Islam also means submission to the will of God and obedience to His law. Islam originated in the Middle East more than 1,400 years ago, and currently, the Muslim population is around 1.8 billion, or one-fourth of the total world population.[1] Islam is presently based not only in the Middle East but also in many Asian and African countries where approximately 69.4 per cent and 27 per cent of the total Muslim population lives, respectively. Europe and the Americas have only 3 per cent of the world’s Muslim population. There are 57 Muslim-majority states in the world now where more than one billion Muslims reside. These are also members of the Organization of Islamic Cooperation, founded in 1969.[2] According to the Statistical, Economic and Social Research and Training Centre for Islamic Countries (SESRIC),[3] the total population in the Muslim majority countries was 1.87 billion persons in 2019.[4] It also estimated the total labour force in the OIC countries as around 700 million workers.[5]

Given the importance of Islam in every Muslim’s daily life, Islamic teachings might have appeared prominently in labour and employment laws in these countries. Indeed, constitutions in some of the Muslim countries feature Islam as the state religion and a fundamental source for lawmaking, further requiring that no law repugnant to the injunctions of Islam could be enacted. An analysis of Constitutions of 57 Muslim majority countries states that 26 declare Islam as the religion of the state. There are 14 countries which proclaim Islam as the source of legislation.[6] However, Islamic provisions regarding labour and employment relations rarely emerge in the labour codes of Muslim countries.

The absence of Islamic principles in labour codes also stems from the fact that most of the Muslim countries were colonized at some point in the past century, and post-independence labour codes were usually just transplanted from the colonizing European nations without linking them to Islam. Thus, while the new nations’ constitutions contain many references to Islam, their labour codes are mostly devoid of even an allusion to Islamic teachings and principles.

0
Chapters
0
Pages
0 +
Hadiths
0 +
Quranic Verses
Read Now
The Prophet (ﷺ) also declared: “if I order you to do something, then do of it as much as you can”. (Sahih Bukhari: 7288)
“O people, your Lord is one and your father Adam is one. There is no favour of an Arab over a foreigner, nor a foreigner over an Arab, and neither white skin over black skin nor black skin over white skin, except by righteousness. Have I not delivered the message?” They said, “The Messenger of Allah(ﷺ) has delivered the message.” (Musnad Aḥmad: 23489)
Anas (RA) reported: “I served the Prophet (ﷺ) for ten years, and he never said to me, "Uf" (a minor harsh word denoting impatience) and never blamed me by saying, "Why did you do so or why did not you do so?" (Sahih Bukhari: 6038)
Previous
Next

Iftikhar Ahmad is a comparative labour law expert and Founder of the Centre for Labour Research, Pakistan. He heads the Labour Law Department at the WageIndicator Foundation, where he has helped raise awareness about labour rights in more than 100 countries.

Iftikhar is a member of the Labour Expert Group, constituted on the advice of the Prime Minister of Pakistan, to provide social protection to the informal economy workers. While working in the field of labour since 2006, he has been engaged with the Government of Pakistan, International Labour Organization and the World Bank on the labour market and legislative reform issues. He has recently completed his pioneering work on the first de jure Labour Rights Index, comparing labour laws of 115 countries on more than 40 evaluation criteria.

Iftikhar obtained his Master’s from the Industrial and Labour Relations School at Cornell University as a Fulbright scholar.

Asghar Jameel is a thought leader in the Talent Management and Human Resource field. During the last 15 years, he lived in Africa, Asia, Europe, and the Middle East while working for companies like Ericsson, Nokia, and VEON. He held several senior management roles such as Cluster Human Resource (HR) Head, Global Business HR, Head of HR Consulting Middle East Region at Nokia, and Chief People Officer in Jazz (leading telecom operator in Pakistan). He is currently based in the Netherlands where he serves as the Group Director HR Headquarters at VEON (leading telecom operator in countries like Algeria, Bangladesh, Kazakhstan, Pakistan, Russia, and Ukraine, to name a few).

Jameel holds a Bachelor’s degree in Law, a Master’s in Business Administration and has attended the HR Executive Program at the Ross School of Business, University of Michigan, USA.