Before discussing employment contracts, we need to discuss the concept of social justice and equity in Islam. Justice means fair dealing of all (whether Muslim or non-Muslim, male or female). The Quran is of the view that all human beings are equal as they were created from the same male and female, namely Adam and Eve (49: 13). The Quran uses two words for justice, “Adl and Qist.” Adl is to follow the balanced way while Qist means to recognize that everyone has some rights, and giving that person his or her rights is justice. Conversely, depriving people of their rights is injustice and against the call of God.

The Quran is of the view that one should stand ﬁrmly for justice even if it is against oneself, one’s family. It commands not to distort justice and do injustice (04: 135). In another passage, it says that God loves those who act justly and do justice with others (05: 42) and has ordered people to do justice (16: 90). To this regard, Ibn Taimiyyah, a thirteenth-century Islamic scholar, said: “God upholds the just state even if it is unbelieving but does not uphold the unjust even if it is Muslim (believing).”[1] And in a tradition of the Prophet (ﷺ), it is quoted that “no sin is more swiftly punished than injustice (and oppression) and the breaking of family ties.”[2] 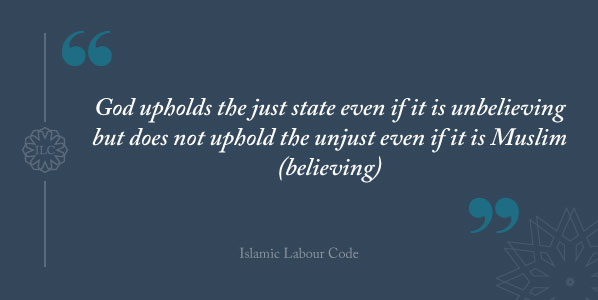 To save all parties from any type of injustice, Islam requires contracts. Contracts can be written or oral, but mostly, it supports written contracts. The Quran directs people to keep their promises after they make them (02: 177, 23: 08, 70: 32). At another place, Quran requires people to fulﬁll their obligations (05: 01) because the question will be asked on the Day of Reckoning whether one fulﬁlled one’s commitments or not (17: 34). Quran also requires that a person, if he has entered into a contract, must fulﬁll the obligation and that Allah dislikes a person who says or contracts to do something but does not do the same (61: 2–3).

A contract may specify contractual obligation and rights on the parts of employer and workers. We also ﬁnd similar provisions in hadith where Prophet (ﷺ)called a person a hypocrite who does not meet contractual obligations (after making a promise). When he is trusted with something, he breaks the trust.[3] We ﬁnd yet another hadith which says that people should abide by their agreements unless there are conditions in the agreements which are unlawful and not per the code of Islam,[4] and in another tradition, it is said that “Islam does not permit any agreement which is to the detriment of any party.”[5]

Given the above, we can ﬁnd some principles that are necessary to follow before contractual obligations start.

There should be no coercion in the making of the contract, and all the parties should come willingly to engage in work. If any of the parties believes that the contract was imposed without its free consent, and fears that the other party is exploiting it due to unfair terms of the contract, such party has the right to openly terminate the contract, as allowed in the Quran (08: 58). The Quran also tells that one who abides by the terms of agreements is like a Prophet (19: 45), and those who do not keep agreements are like Satan (14: 22). Both parties should be aware of their rights and obligations. The contract should, among other things, clearly specify the amount of compensation, time of work, the interval of compensation, and as well as the quality and quantity of work. We ﬁnd this in the story of Musa (AS) where Musa (AS), as a worker, contracts with Shuaib (AS), an employer and another Prophet, to tend the employer’s ﬂock of sheep for eight years, and at the end of this period, the employer would wed one of his daughters to Musa. Shuaib (AS) also asks Musa (AS) that if he can work for ten years, it would be relatively good, but he cannot force him. In return, Musa (AS) tells the employer that he accepts the agreement; however, he may complete eight or ten years—it depends on his choice, not on that of the employer (28: 27–28). This story also shows that ﬁxed term contracts can be renewed based on performance. 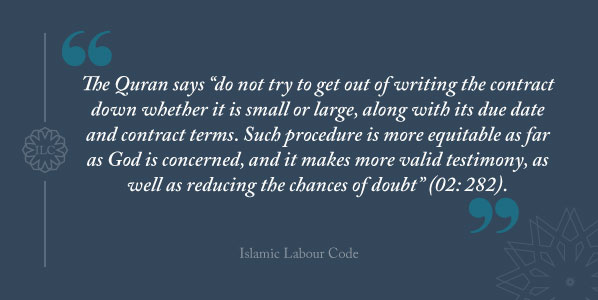 Parties should write down the contract so that if any dispute occurs between the parties, they can settle the dispute amicably. The Quran says “do not try to get out of writing the contract down whether it is small or large, along with its due date and contract terms. Such procedure is more equitable as far as God is concerned, and it makes more valid testimony, as well as reducing the chances of doubt” (02: 282).

In the end, there is also a provision of inserting a boilerplate no injury clause in the contract as said in the Quran: “Do not wrong others, and you will not be wronged (02: 279)” and a  hadith that says “suffer no loss to yourselves nor make others suffer.”[6] There should be no provision in the contract that provides undue beneﬁt to one party at the expense of others.[7]

[2] “No sin deserves quicker punishment from Allah Almighty for its doer in the world, along with what is prepared for him in the Hereafter, than transgression and severing family ties.” (Sunan al-Tirmidhī: 2511)

A similar hadith is narrated in al-Adab al-Mufrad: 588.

[3] “The signs of a hypocrite are three: Whenever he speaks, he tells a lie; whenever he is entrusted, he proves dishonest; whenever he promises he breaks his promise.” (Sahih al-Bukhari 2749)

[6] “There should be neither harming nor reciprocating harm.” (Sunan Ibn Majah: 2341)

[8] We must emphasize that the following hadith is not directly related to work contracts, and this rule can be inferred only by using Qiyas, by expanding the logic.

[9] “Whenever you take an oath to do something and later you find that something else is better than the first, then do the better one and make expiation for your oath.” (Sahih al-Bukhari: 6622)