Labour Rights in the Quran and Sunnah

There are ﬁve different words (used in Islamic sources) relevant to the concept of work, i.e., amal (عمل) , sa’y (سعی), ﬁ’l (فعل) , and Kasab (کسب) all these roughly meaning work, and the ﬁfth word is the Ajr (اجر) , which is the compensation for work or employment. The word amal has four different meanings: (1) work or labour, (2) act or deed, (3) production or manufacturing, and (4) province or some part of a country.[1] To most religious and Islamic economic scholars, al-amal in the Quran and hadith refers to a broad and general sense of work which also includes spiritual and religious work. There are more than 500 verses in the Quran that refer to the “amal” in its broader meaning. However, what is important to note is that after the death of the Prophet (ﷺ) and in the work of exegetes, amal came to denote not the act of manufacturing or labour but only the theological meditation and worship.[2] Not all but some of the verses still refer to the act of manufacturing or labour speciﬁcally, even in the interpretations of these exegetes.

Regarding amal, it is also noteworthy that Islam does not differentiate or discriminate between kinds of work, that is, manual and intellectual. Its principles apply to all parties whether they are employers, employees or self-employed, and in this regard, there is no differentiation between a teacher and mechanic, government employee and private sector employee, or a ruler and a commoner. Quran refers to the manual labour of Prophet Nuh (AS) while talking about the construction of the boat (11: 37), to Prophet Dawud (AS) referring to the production and manufacture of suits of armour (34: 10–11), tending of sheep by the Prophet Musa (AS) (28: 26–27), construction of a wall by the companion of Prophet Musa (AS) (18: 77) and by Zulqarnain (18: 86). It also mentions the intellectual labour of the Prophet Yusuf (AS) who was appointed as a treasurer and custodian (or ﬁnance minister) by the King of Egypt (12:55). 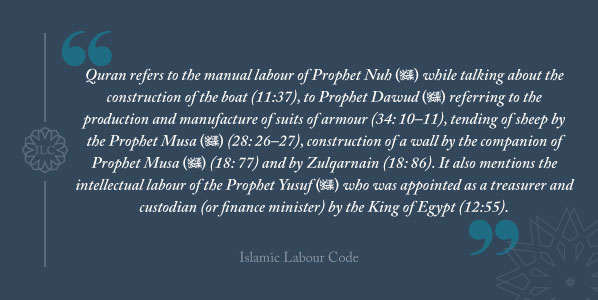 Before getting into the details of worker rights in the Quran and Sunnah, certain terms need further explanation. In Islamic jurisprudence, the word Ijarah is used to refer to the renting or hiring the assets or properties as well as the hiring of a person’s services. More speciﬁcally, it means to employ the services of a person in consideration of wages paid to him/her for the hired services. The employer is called Musta’jir, while the employee is called ajir. And the wages paid are called ujrah or Ja’ala.[3]