Islam not only talks about the equitable distribution of resources in the society, but it also gives the whole population a right to the basic standard of living (through basic state pensions). This basic standard of living is ensured through the imposition of the Zakat on the rich with the aim that “this wealth may not become a fortune used by the rich among you” (59: 07).[1]

Zakat is to be taken from the afﬂuent and then distributed and spent on the welfare of the poor.[2] As Zakat is one of the ﬁve pillars of Islam, and it is obligatory, we should expect that a minimum standard of living could be ensured if people pay Zakat on their belongings above the minimum (nisab). As quoted earlier, the Prophet (ﷺ)required an employer to pay enough so that the basic needs of workers are met.

Zakat not only provides a minimum standard of living for people but, by increasing their purchasing power, it also promotes a sense of solidarity and cohesion within the community by decreasing social inequality. The Islamic system provides a social safety net for the needy through Zakat.

The Quran deﬁnes the beneﬁciaries of Zakat as such “Alms (Zakat) are for the poor and the needy, and for those employed to administer the funds; for those whose hearts have been recently reconciled to Truth; for those in bondage and in debt; in the cause of God; and for the wayfarer: thus is it ordained by God, and God is full of knowledge and wisdom.” (09: 60).[3]

Islam makes it the collective responsibility of society to provide the deprived with all the basic necessities of life. If society backs away from this obligation, God’s protection is taken away from such a society.[4] The fourth Caliph, Ali (RA), said, “Allah has made it obligatory upon the rich to pay out of their wealth whatever is sufﬁcient for the poor. If the poor starve, or go unclad or suffer difﬁculties, it is because the rich have deprived them. Hence it is proper for God, the Almighty and the Exalted to bring them to account and to punish them.”

It is the state’s responsibility to provide everyone with a basic state pension through the collection of Zakat and imposing other taxes if Zakat funds are not enough for meeting the expenditures. There is a hadith of the Prophet (ﷺ)which says that “the head of the state is the guardian for him who has nobody to support him.” In another hadith, “whoever amongst you dies in debt or leaves behind needy children, you should call me for help, for I am his guardian. And who amongst you leaves the property, his inheritor is entitled to get it, whoever he is.”[5] 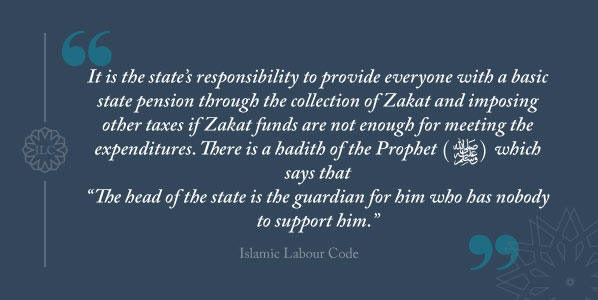 It is important to note here that although Zakat is obligatory on Muslims only, it can be spent on the welfare of all the citizens of the state, whether Muslim or non-Muslim.[6]

We ﬁnd this in the period of the ﬁrst Caliph, Abu Bakr (RA) when the commander of Muslim forces signed an agreement with the non-Muslims of a conquered land and treated them equally in the following words: “And I have granted the right that if an old person becomes incapable of working or is suffering from ill health or is destitute after being rich, so much so that his co-religionists start giving him alms, then his jizyah[7] will be remitted; he and his family will receive the allowance for maintenance from public treasury as long as he lives in the Islamic State.”[8]

We also ﬁnd similar practice during the reign of the second Caliph where he ﬁxed stipends for non-Muslims when he watched them begging, and they were old and sick, especially unable to earn a living.[9]

According to Islamic jurists, Zakat can be used to provide training to the unemployed and also in job rehabilitation programs. Zakat can also be used as an income support program. This use is consistent with the principles of most unemployment insurance programs, which require recipients to be available for work and seeking work. Islam disapproves of “voluntary unemployment” (as we have seen Islam’s view on ascetism and Suﬁsm), and it makes it obligatory for everyone to look for legitimate earning.

Zakat is not allowed to a person who can earn, but still, it can be used to supplement the low incomes of workers or as stipends while workers are being retrained or rehabilitated. The Prophet (ﷺ)praised a tribe on their collective use of resources whenever a need arises.[10]

[1] “This distribution system is to ensure) that (the whole wealth) may not circulate (only) amongst the rich of you (but should circulate amongst all the classes of society).”

[2] “Allah has made it obligatory for them to pay the Zakat from their property and it is to be taken from the wealthy among them and given to the poor.” (Sahih al-Bukhari: 1395)

[5] “I am, according to the Book of Allah, nearest to the believers of all the human beings. So, whoever amongst you dies in debt or leaves behind destitute children, you should call me (for help)), for I am his guardian. And who amongst you leaves property, his inheritor is entitled to get it, whoever he is.” (Sahih Muslim 1619 d)

[6] Zakat is the social security institution created by Islam. It requires people to pay 2.5 percent of their savings after a minimum level is reached. It is the responsibility of the state to collect and distribute Zakat. On nonpayment, state can force people to pay it or take action against them.

[7] Jizyah was annual poll tax levied on non-Muslims living in the Muslim state for military protection and for exemption from military service. It was imposed on non-Muslim men only. Children, women, and old were exempted. Moreover, it was based on the “ability to pay” principle, that is, higher rate for rich and lower for the poor.

[10] The Prophet (ﷺ)said, “When the people of Ash`ari tribe ran short of food during the holy battles, or the food of their families in Medina ran short, they would collect all their remaining food in one sheet and then distribute it among themselves equally by measuring it with a bowl. So, these people are from me, and I am from them.” (Sahih Bukhari: 2486)