The Quran refers to hiring the services of Musa (AS) by Prophet Shuaib (AS) for a wage and also for a speciﬁed period of time, eight years (28: 26–27). In another instance, it talks about Zulqarnain when people request him to build a wall for them, and that they would be paying him a tribute or wages (18: 94), but he does not accept their offer, instead of telling them to only provide their labour in the course of building the wall. The Quran also counsels hiring workers for collection and distribution of the Zakat (poor tax) and even commands that wages of Zakat workers are to be paid from the collected funds (09: 60). During the life of the Prophet (ﷺ), there was a group of people (called ashab e Suffah) who lived near the mosque and worked as the Prophet’s (ﷺ) clerks and emissaries. They were also the ﬁrst public servants in the Islamic state.[1]

The Quran instructs that wages are a right, not benevolence from the employer, as in the following words, “those who believe and perform honourable deeds (good work) . . . their earnings will never be withheld from them” (95: 06). Anticipating modern notions of express or implied contracts of employment, the Prophet (ﷺ) also forbade the hiring of a worker without the prior ﬁxation of wages for the work.[2] The above instances from Quran and hadith show that worker should be explicitly informed about the wages that he would receive on completion of his task or wage period. This speciﬁcation of wages can either be in oral or written form. However, if there is some customary fee or pay for some type of work, wage speciﬁcation may not be necessary. 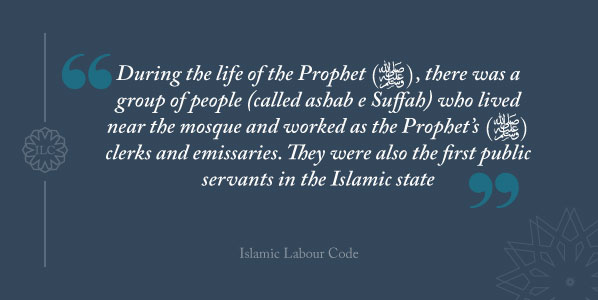 The second rule about wages is that these must be sufﬁcient to provide the basic necessities of life for the workers. In this way, Islam talks not only about a minimum but also a just or “living” wage. There is a verse in Quran which says that a “family head (father) should support women (after divorcing them, through alimony for children) and clothe them properly” (02: 233). The word “ma’aruf” (proper) in the above verse is interpreted as “in accordance with the norms of time and space.” So, it can be inferred from this verse that compensation should meet at least the cost of basic needs (food and clothing were the basic necessities at the time of the revelation of the Quran) per the norms of the time.

Different traditions from the Prophet (ﷺ) deal speciﬁcally with these subjects. The Prophet (ﷺ) said that “an employee (male/female) is entitled to at least moderately good food and clothing and not being burdened except what he/she can bear”[3] and “make them (workers) satisﬁed regarding their basic needs.”[4] In another instance, the Prophet (ﷺ) said, “Those working under you are like your brothers whom God has made your subordinates. So, he who has his brother working under him let him feed what he feeds himself and clothe him what he clothes himself with.”[5] We ﬁnd references in the earlier Islamic history that Umar (RA) ﬁxed the wages for military personnel. During his period, salaries were also revised based on several criteria such as length of service, best performance, and knowledge level.[6]

These ahadith show that Islam has referred both to the minimum and ideal/just wage, and it speciﬁes the minimum wage so that the basic needs of a worker are met. Corresponding to the Universal Declaration of Human Rights’ call for “just and favourable remuneration,” Islam is of the view that workers’ wages should be set in a way that these satisfy all their and their families’ needs in a humane manner. In another hadith, it is mentioned that “whoever takes a public job and has no house (of his own), should have one” (i.e., the government should provide housing). If he is not married, he should get married, and if he does not have something to ride, he should have one (provisioned by the government).”[7] By combining the provisions in all above ahadith, it is evident that Islam requires the employers to provide the workers with housing, medical facilities, job education or training, transportation, and meals. By focusing more on the necessities and minimum level of living conditions (which can be different from time to time and place to place, making it easier to deﬁne them), Islam cares more about the real wages which need to be maintained or increased in comparison with the nominal or monetary wages.[8] In conclusion, setting a minimum wage at a “fair,” “just,” or “living wage” level is quite in line with Islamic principles.

The third principle in ﬁxation of wages is that wages should be set keeping in view the prevailing conditions such as inﬂation, regional price differences, and needs. It is related that Umar (RA) used to determine wages according to the conditions prevalent in the city and the employees’ personal needs. This is also evident in a tradition where the Prophet (ﷺ) gave double the share in ghanimah (war spoils) to the persons with families compared to unmarried persons. 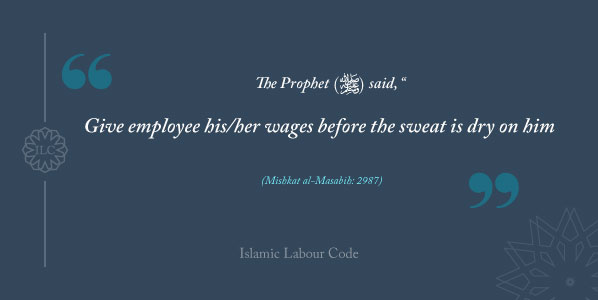 The fourth principle is the punctual and timely payment of wages. It is narrated in a hadith that the Prophet (ﷺ) said, “Give employee his/her wages before the sweat is dry on him.”[9] In another hadith, it is related, “The rich, despite his riches, cannot delay of payment to the worker, for it is a crime.”[10] These Ahadith show the general principle that wages need to be paid promptly, and an employer cannot unduly withhold the wages of an employee. However, workers and employers can negotiate the payment of wages on daily, weekly, fortnightly, or monthly terms.

The ﬁfth principle regarding wages is their full payment. Quran says that “Never will I suffer to be lost the work of any of you, be he male or female” (03: 195), and the Prophet (ﷺ) said that “Allah would be the enemy of three persons on the day of Resurrection and one of them would be the one who hired somebody for some stipulated wage, took full advantage of his labour and then did not give him his due.”[11] The third person is compared in hadith to the one who made a free person a slave and sold him for money. This hadith shows that not only a worker should receive full wages for his/her work, but also it prohibits forced labour. Withholding a worker’s remuneration is considered one of the gravest sins. This hadith also sheds some light on the issue of wage theft.[12]

The Prophet (ﷺ) once said “man has no right in the share in which God has no right. God’s share is his command to give everyone his/her due and not to encroach on what belongs to another”[13] and it is narrated about the Prophet (ﷺ) that he never gave a worker less than what was due.[14]

The Quran has different verses that deal with the subject quite lucidly. It says in one place “And O my people! Give just measure and weight, nor withhold from the people the things that are their due: commit not evil in the land with intent to make mischief” (11: 85 and also 26: 182) and in another place, “So establish weight with justice and fall not short in the balance” (55: 07). These verses show that Allah does not like a person to pay another less than what is their due, and it is considered wrong that a person should ask for a full measure of work but in return give less than full pay or asking for full compensation but giving less than complete work.

The Quran also deals with the issue of wage theft in the following words “Woe to those that deal in fraud; those who, when they have to receive by measure from men, exact full measure, but when they have to give by measure or weight to men, give less than due” (83: 1–3). The word tatﬁf in this verse refers to an employer who takes full work from an employee (as expressed in above hadith), but when the time of payment comes, the employee is deprived of full wages. In the same vein, we can see the hadith by the Prophet (ﷺ) that “to cheat the easy-going customer (which can also be interpreted as a worker or even employer) constitutes riba or illicit gain.”[15] It is important to note, however, that this verse also refers to a labourer who receives full wages but does not work or rather shirks his work. 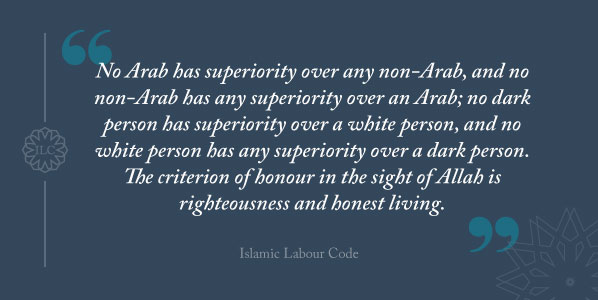 Lastly, there is also the issue of equal pay for equal work. Islam provides for equal pay for equal work and work of equal value. Islam is of the view that every work (whether right or wrong) is rewarded or punished and in paying for the work, it does not differentiate between male and female, white and black, and does not allow any discrimination on racial, religious, origin, and language or ethnicity backgrounds. Allah says that “I never cause loss to the labour of a worker, be that male or female” (03: 195), and in another place, He says that “to them, we shall pay the price of their works and they will not be paid diminishingly” (11: 15). This principle of nondiscrimination is also substantiated by the last sermon of the Prophet (ﷺ), “No Arab has superiority over any non-Arab, and no non-Arab has any superiority over an Arab; no dark person has superiority over a white person, and no white person has any superiority over a dark person. The criterion of honour in the sight of Allah is righteousness and honest living.”[16] In some other verses, the Quran tells that whoever has done good work and bad work will see it placed before him (99: 07–08, 18: 49). All the above verses show that Islam wants a worker to be paid for his work without any over or undervaluation. It does not discriminate on the basis of sex, religion, race, ethnicity, region or origin, etc.

[2] Bayhaqi and Abdul Razzaq in al-Musannaf

[8] Moreover, as argued by Zulﬁqar (2007), in Islam there is a basis of setting the minimum as we ﬁnd this rule in practice on Zakat (the second pillar of Islam), which is applicable only if a person holds the minimum quantity of gold, silver or currency for full one year, that is, nisab.

It is important to mention here that riba/usury is declared haram in Islam (02: 275).