Labour relations or labour and employment law can be seen as part of Islamic economic law which has evolved through the development of Islamic law that, i.e., Shari’a. The Arabic word Shari’a literally means the way to a watering-place. In Islamic jurisprudence, Shari’a is considered to make rules for every aspect of life, whether economic, social, or religious. The primary sources of Shari’a are the Quran and Sunnah. The secondary sources are Ijma (Consensus), Qiyas (Analogical Reasoning), Istihsan (Equity in Islamic Law), Maslahah Mursalah (Public Interest), Urf (Custom), Sadd al-Dhara’i (Blocking the Means), and Ijtihad (Critical Thinking).

As argued by El-ashker and Wilson (2006), the Prophet’s (ﷺ) life divides the sources of Islamic law into two main categories: ﬁrst are the resources established by the Prophet (ﷺ) during his lifetime, i.e., the Quran and Sunnah, while the others are sources that were identiﬁed and used by Muslims after the Prophet’s (ﷺ) death, i.e., Ijma, Qiyas, Urf, etc.

The Quran, the holy text of Muslims and the word of God, is the primary source of Islamic law. The Quran was revealed in the Arabic language over approximately 23 years in fragmented texts addressing the needs of the time as well as providing solutions to different problems that arose at the time. Quranic texts were always written during revelation by a team nominated by the Prophet (ﷺ) for this purpose. During the Prophet’s (ﷺ) time, the Quran was in a written form. However, it was not compiled in one copy, which was done during the period of Abu Bakr (RA), the ﬁrst of the four celebrated rightly guided Caliphs. During the time of Uthman (RA), the third Caliph, copies were made of the master copy and were distributed throughout the Islamic world. The Quranic text, in use today, is precisely the same that was distributed 1,400 years ago in the seventh century by Uthman (RA).[1] 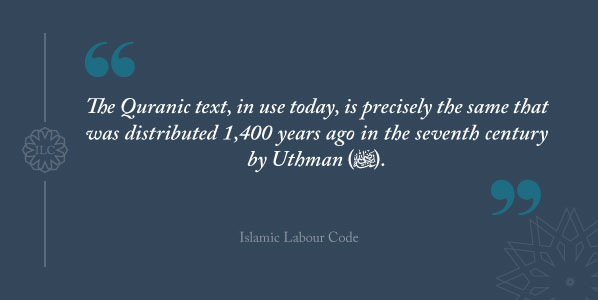 Sunnah is also considered a primary source of Islamic law. The Sunnah contains three elements; sayings, deeds (collectively called Ahadith) and approval of others’ acts by the Prophet (ﷺ). There is a difference in Islam between the Quran and hadith in that the Quran is the word of God while the Prophet’s (ﷺ) sayings are not. However, in Islamic jurisprudence, the signiﬁcance of Sunnah is equal in importance to Quranic injunctions as the Prophet (ﷺ) was inspired by God in whatever he said and did, a theme supported in the Quran (53:3–4).

During the time of the Prophet (ﷺ), companions wrote his sayings, which they also conveyed to others. However, concerted efforts to collect and edit Ahadith started in the mid-eighth century (around 100 years after the Prophet’s (ﷺ) death). In order to maintain the authenticity and accuracy of Ahadith, a unique referencing method (called isnad) was developed by the researchers, which meant that every hadith was to be supported by a chain of informants where the ﬁrst person would be the one who heard or saw the Prophet (ﷺ) saying, doing, or approving something. Various compilations of hadith were made afterwards; six of these are considered to be the most authentic (Sihah al-Sittah).[2] 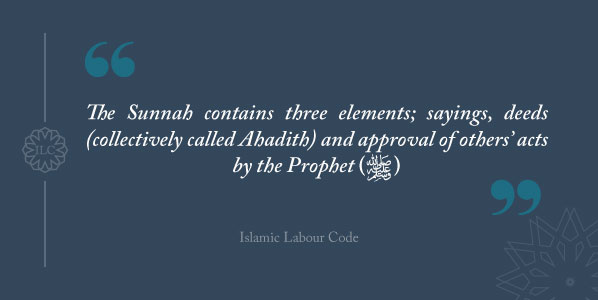 Ijma is deﬁned as an agreement among the Muslim jurists in a particular age on a question of law. Ijma and the other sources of law are to be used only when there is no clear guideline or explicit rule in Quran and Sunnah on the matter under consideration. The core of all the sources is the Quran and Sunnah. Ijma is acceptable only when there is a general agreement among Muslim jurists/ scholars, and this agreement is applicable only to secular matters. An Ijma among the jurists cannot change fundamental rituals and rules of worship. 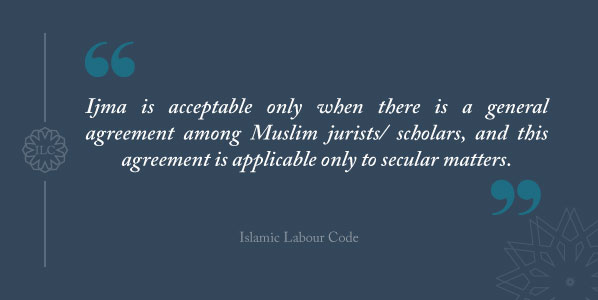 Qiyas is the fourth source of Shari’a, and it is used only when a matter has never been discussed under the above mentioned three sources. It is a process of deducing a rule from the earlier sources. It is the extension of a Shariah ruling from an original case to a new case because the new case has the same effective cause as the original case. Qiyas (a form of Ijtihad) is also validated by the Quran and Hadith.[3] There are also other sources like Istihsan (juristic preference), Istislah (public interest), and Urf (custom and usage), which are used in deriving the laws from the Quran and Sunnah. It is important to note that the other sources of Islamic law are weak in comparison to the primary sources, i.e., Quran and Sunnah. However, these sources are quite relevant to the derivation of rules for socio-economic issues, including labour relations, because the Quran and Sunnah do not discuss modern labour and employment issues which were nonexistent at the advent of the religion (1400 years ago). Instead, these provided general guidelines on labour and employment issues. The rules have been derived subsequently by the jurists, including the companions of the Prophet (ﷺ), through Ijma, Qiyas, Ijtihad, and Istislah, and sometimes Urf. The coming pages are also based, though essentially on Quran and Sunnah, on Qiyas, Istislah and Urf.

[3] It is narrated in Sunan Abi Dawud, “When the Messenger of Allah (ﷺ) intended to send Mu’adh ibn Jabal to the Yemen, he asked: How will you judge when the occasion of deciding a case arises?

He asked: (What will you do) if you do not find any guidance in the Sunnah of the Messenger of Allah (ﷺ) and in Allah’s Book?

He replied: I shall do my best to form an opinion and I shall spare no effort.