Islam requires every person to look for work and earn money to satisfy his personal and his family’s needs with his own earnings.[1] It regards begging from others as haram (unlawful) if one can earn.[2] It also obligates a worker to earn his income through halal (lawful) eans. Islam not only encourages people to “do good works (103–3)” but also requires them to put their efforts into the work, which is beneﬁcial for humanity.[3] Work, according to Islam, is a moral affair that requires that a worker may not earn a living through prohibited types of employment like prostitution, taking an interest, etc. It also considers income to be haram if it is earned by cheating or exploiting someone.

Islam does not want people to be ascetics who do not enjoy worldly provisions. Instead, it asks people not to forgo material blessings and to work for the betterment of their material lives (28: 77). Instead of allowing jealousy toward others who excel, Islam teaches people to specialize in the areas where they can excel (04: 32).

Islam also talks about the idea of accountability and performance appraisal, where it tells people they are responsible for their actions (53: 38–9). It suggests that people should be rewarded for their efforts, whether large or small. Workers are also encouraged to work with commitment (Ihsan) and a passion for improvement (Itqan). Ihsan is deﬁned in a hadith where the Prophet (ﷺ)said that it is “worshipping Allah as if you see Him, for if you don’t see Him, then truly He sees you.”[4] Keeping in view this meaning of Ihsan, that is, doing something with utmost commitment, it makes workers work at their best without any supervision. Ihsan is also deﬁned as doing good deeds, and the Quran questions: “Is there any reward for good—other than good?” (55: 60) This view compels both the employee and employer to maintain positive relations with each other. 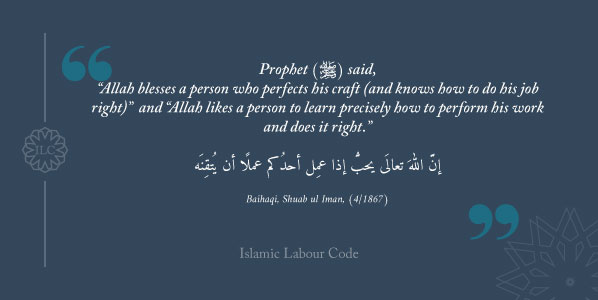 Moreover, Islam also advises workers to strive in the process of performing and consistently to upgrade their work.[5] It is narrated that Prophet (ﷺ)said, “Allah blesses a person who perfects his craft (and knows how to do his job right)”[6] and “Allah likes a person to learn precisely how to perform his work and does it right.”[7] The Prophet (ﷺ)also appreciated a clan when they said that manliness is comprised of “temperance and professional skill.” These ahadith encourage workers to do work in a better way and strive for perfection and competence.[8]

Another responsibility of the worker is keeping up trust and agreements. The Quran uses the word Ameen for a person who fulﬁlls his promises and agreements. As mentioned above, the Quran regards trustworthiness as one of the primary criteria for hiring a worker. The Quran tells people not to betray their trust (8: 27), and in a hadith, the Prophet (ﷺ)is quoted as saying, “a person who is not trustworthy has not perfected his faith and a person who does not keep up his promises has not perfected his religion.”[9] Moreover, the attribute of Amanah is essential in the workplace context, as it not only requires people to fulﬁll their agreements and meet their targets but also to use the power vested in their position judiciously and not for their personal beneﬁts. An important question would be whether Islam allows whistleblowing by employees with insider knowledge and whether it would be against the trust. The straightforward response in the Quran is “Help one another in virtue, righteousness and piety; but do not help one another in sin and transgression” (05: 02). Hence, it supports whistleblowing.[10]

The Quran also talks about the attributes of sincerity and honesty. A hadith of the Prophet (ﷺ)considers earning of a labourer to be best if he or she works with sincerity.[11] It requires workers to be truthful and not to neglect their work. The Quran talks about the shirking of work, and it disapproved this practice           (83: 01). Islamic jurists have considered that underweighting in this verse refers to the work shirking by a worker who demands full wages for his work but does not work in accordance with the terms of work contract either by using the work time on other activities or contrary to the workplace rules. The Prophet (ﷺ)equated religion with sincerity and said a person is religious only when he is also sincere to the common folk (which includes employers and coworkers as well).[12]

Islam also requires workers to be transparent in their dealings and prohibits them from misrepresentation of their abilities to gain employment. It has been referred to as “transgression and injustice” in the Quran when someone wants to acquire property (in the broader sense of the word which includes all types of wealth) through cheating others. The Prophet (ﷺ)is also quoted as saying that “one who cheats us is not one of us.”[13]

The most crucial principle of workplace relations in Islam is the criterion of intention (niyyah), and not the result, to measure the beneﬁts of a work to the workplace and community. The Prophet (ﷺ)is quoted as saying, “Deeds are [a result] only of the intentions [of the actor], and an individual is [rewarded] only according to that which he intends.”[14] Intentions in Islam are so important that the Prophet (ﷺ)compared a person working energetically to earn a living for himself or his family to the one in the cause of Allah, while if he is working only to show off to his superiors, he is working for the sake of the devil. A critical workplace implication of this principle is that workers should not be punished for making unintended mistakes, and at the same time, it tells the workers to do their work with sincerity.[15]

The next chapter is the prototype of an Islamic Labour Code. It covers fundamental workers’ rights, i.e., freedom of association and the right to collective bargaining as well as the right to strike, equality of opportunity and treatment, the abolition of child labour and forced labour, and occupational safety and health. The Code treats occupational safety and health as a fundamental labour right. After adding necessary provisions on core workplace rights, the Labour Code has detailed provisions on employment contracts and their termination. It is followed by provisions on wages, working hours and various kinds of leave. There is a separate chapter on social security. The last chapter on labour inspection system gives an idea of the responsibilities of the state in ensuring compliance with this Code. Like all legislation, Islamic Labour Codes also can create certain exceptions.[16] This is a work in progress, a living document, which will be updated in the coming years.

While drafting the Islamic Labour Code, we have taken into account the provisions of International Labour Standards, i.e., conventions and recommendations of the International Labour Organization, which is the specialised UN agency on labour-related matters. It is also the only tripartite agency within the UN system which has representation from governments, employers and workers of more than 180 member states. ILO has so far adopted 190 Conventions and 206 Recommendations. Of these, around 70 conventions are up to date. Eight of these conventions are considered fundamental conventions, encompassing the core labour standards. These cover the subjects of freedom of association and the rights to collective bargaining, the elimination of all forms of forced or compulsory labour, the effective abolition of child labour, and the elimination of discrimination in respect of employment and occupation.

The provisions of Islamic Labour Coode including the chapters on fundamental workplace rights as enunciated above as well as the chapters on occupational safety and health, workplace harassment, social security, employment and working conditions as well as the last chapter on labour inspection system benefit from the internationally agreed standards in the form of ILO conventions and recommendations.[17]

[1] “Indeed, Allah loves those who are employed. Whosoever strives hard to support his family and dependents will receive a reward which is equal to he who ﬁghts for the cause of Allah,” narrated by Musnad Ahmad.

[3] In a hadith, honestly earned living is considered as one of avenues of worship. On the other hand, it persuades people to do work which is beneﬁcial for others as well by saying that “the best of the people are those who beneﬁt others.”

“The believer is friendly and befriended, for there is no goodness in one who is neither friendly, nor befriended. The best of people are those who are most beneficial to people.” (al-Mu’jam al-Awsaṭ: 5937)

[5] Quran also requires the worker to be fully aware of his responsibilities and (should strive for competence and perfection), and a worker should know how to perform duties competently and efﬁciently (12: 54–5).

hadith also guides individuals to stick with a profession once they have achieved expertise in it:

“Whoever achieves at something, let him stick with It.” (Sunan Ibn Majah: 2147)

“If Allah causes provision to come to one of you through a certain means, he should not leave it unless it changes or deteriorates.” (Sunan Ibn Majah: 2148)

[8] Talking about fulﬁlling the duties and promoting action, the Prophet (ﷺ)said, “If the last hour strikes and ﬁnds you holding a nursling, go ahead and plant it.” Musnad Ahmad.

[10] Hiding of evidence is prohibited: “And who is more unjust than he who hides the testimony which is with him (in the Book) from Allah? And Allah is not unaware of your deeds.” (02:140)

“And do not conceal evidence. And the one who conceals it, his heart is certainly sinful.” (02:283)

However, Quran has also prohibited false evidence and it is considered one of the major crimes. Qurans says: “And these are the people who do not attend (both verbally and practically) the false and untruthful matters, and when they pass by evil activities, they pass on (observing caution) with utmost nobility and dignity.” (25:72) 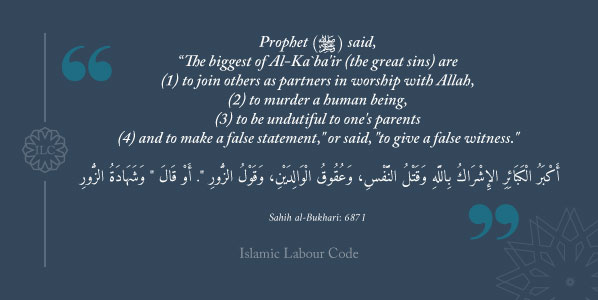 “No man earns anything better than that which he earns with his own hands, and what a man spends on himself, his wife, his child and his servant, then it is charity.” (Sunan Ibn Majah: 2138)

[13] The whole hadith is as follows, “The Prophet (ﷺ)passed by a heap of grain and put his hand into it and his ﬁngers came upon some dampness. He said, “Owner of this grain, what is this?” He said, “The rain caught it, Messenger of Allah (ﷺ)” He said, “Why did you not put it on top of the heap so that the people could see it! Anyone who cheats us is not one of us.” (Jami` at-Tirmidhi 1315)

[15] “A worker is responsible for the property of his employer.” This hadith requires the worker not to be negligent of his duties and take due care of all types of property at the workplace.

[16] The following hadith an exception in a rule related to sanctuary of Makkah. It shows that exceptions can be added in general rules to easy any difficulty. “On the day of the conquest of Mecca, the Prophet (ﷺ)said, “There is no more emigration (from Mecca) but Jihad and intentions, and whenever you are called for Jihad, you should go immediately. No doubt, Allah has made this place (Mecca) a sanctuary since the creation of the heavens and the earth and will remain a sanctuary till the Day of Resurrection as Allah has ordained its sanctity. Fighting was not permissible in it for anyone before me, and even for me it was allowed only for a portion of a day. So, it is a sanctuary with Allah’s sanctity till the Day of Resurrection. Its thorns should not be uprooted and its game should not be chased; and its luqata (fallen things) should not be picked up except by one who would announce that publicly, and its vegetation (grass etc.) should not be cut.” Al-`Abbas said, “O Allah’s Messenger (ﷺ)! Except Al-Idhkhir, (for it is used by their blacksmiths and for their domestic purposes).” So, the Prophet (ﷺ)said, “Except Al-Idhkhir.”   (Sahih al-Bukhari: 1834)