Islam, derived from the Arabic root “Salema”, means peace, purity, submission, and obedience. Islam also means submission to the will of God and obedience to His law. Islam originated in the Middle East more than 1,400 years ago, and currently, the Muslim population is around 1.8 billion, or one-fourth of the total world population.[1] Islam is presently based not only in the Middle East but also in many Asian and African countries where approx. 69.4 per cent and 27 per cent of the total Muslim population lives, respectively. Europe and the Americas have only 3 per cent of the world’s Muslim population. There are 57 Muslim-majority states in the world now where more than one billion Muslims reside. These are also members of the Organization of Islamic Cooperation, founded in 1969.[2]

Given the importance of Islam in every Muslim’s daily life, Islamic teachings might have appeared prominently in labour and employment laws in these countries. Indeed, constitutions in some of the Muslim countries feature Islam as the state religion and a fundamental source for lawmaking, further requiring that no law repugnant to the injunctions of Islam could be enacted. An analysis of Constitutions of 57 Muslim majority countries states that 26 declare Islam as the religion of the state. There are 14 countries which proclaim Islam as the source of legislation.[3] However, Islamic provisions regarding labour and employment relations rarely emerge in the labour codes of Muslim countries.

The absence of Islamic principles in labour codes also stems from the fact that most of the Muslim countries were colonized at some point in the past century, and post-independence labour codes were usually just transplanted from the colonizing European nations without linking them to Islam. Thus, while the new nations’ constitutions contain many references to Islam, their labour codes are mostly devoid of even an allusion to Islamic teachings and principles.

In this work, we explore the possibility whether Islam, as a religion, can play a signiﬁcant role in creation and adoption of labour codes in Muslim countries which comport with international labour standards and also meet the needs of modern economies. The religious nature of such labour codes will provide these with three essential characteristics: sustainability, adaptability, and stability. The religious and spiritual basis will make these more authentic, resonating better with the Muslim population and giving workers, employers, and citizens a sense of ownership and involvement in the labour law system.[4] Authenticity, ownership of the stakeholders and participation of the masses will also ensure more effective implementation.

Our starting point is the world of work at the time of the emergence of Islam and the occupations prevalent in Arabia. Arabs were mainly involved in “agriculture, trade, navigation and craftsmanship, which included carpentry and black smithery.”[5] We ﬁnd references to these in various Quranic verses and sayings of the Prophet Muhammad (ﷺ). The most important and widely practised occupations were trade and agriculture. People of Makkah, the birthplace of Prophet Muhammad (ﷺ), were mostly involved in the trade. The people of Madina were engaged in agriculture. The institution of slavery was quite established at the time.[6] We ﬁnd many verses in the Quran on the treatment of slaves. Keeping this in view, most of the time, the Quran and hadith refer to the master-slave and sometimes to the master-servant relationship. Moreover, because the economy at the time revolved around wars and battles, and most of the hiring was for military purposes, we see some provisions purely relating to the military. Nonetheless, many Quranic verses and ahadith are relevant to the modern employer-employee relationship. 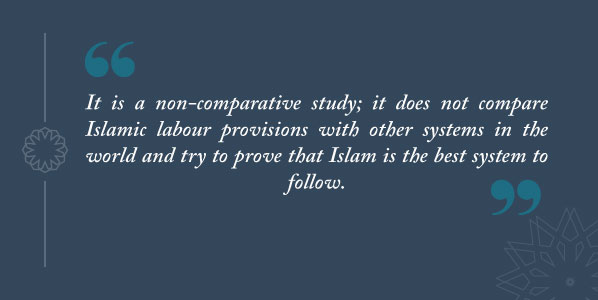 This work is different from other studies done on the Islamic labour relations system in many ways. It is a non-comparative study; it does not compare Islamic labour provisions with other systems in the world and try to prove that Islam is the best system to follow. As explained by Bayat (1992), most of the literature on the subject is “an undeclared argument against Marxism”. There has always been an attempt to compare Islamic economic teachings with those of capitalist and socialist systems.  This book presents the Islamic system of labour law as it is, without trying to Islamicize current and modern workers’ rights provisions. It also does not claim that the Quran and Sunnah, the primary sources of Islamic lawmaking, have explained and resolved every workplace problem. These are not (and never were) labour codes; instead, these are believed to be the codes of life. Various matters have been discussed in these sources in general terms, and most of the time, rules have been derived from these general provisions. The inferences from the Quran and Sunnah are based on our own interpretations, and we do not in any way claim these to be the only acceptable view. Any mistake in inference or interpretation of the verses of the Quran or excerpts from hadith is solely ours.[7]

In the early Islamic history (and even now at some places around the world), asceticism and Suﬁsm led to voluntary unemployment among people. However, historians maintain that attitudes of neglecting and avoiding work came from a negative image of manual labour, which was looked down upon in the Arab culture. Bayat (1992) has shown how the Arabic word for profession and occupation (Al-Mihna) has the connotation of humiliation and degradation. However, this view was not universal. The abandonment of work by Suﬁs was highly criticized by both the Suﬁs like Muhasibi (d. 857 AD), Talib al Makki and scholars like Shaibani (d. 804 AD), a famous Hanaﬁ jurist. We also ﬁnd work on the importance of labour and earning by others like Hanbalites (Ibn Taimiyyah (d. 1328 AD) and Abu Bakar al Khallal (d. 923 AD). They showed through hadith collections that “economic activity, both commerce and manual labour” was a duty imposed upon every individual. We ﬁnd that a positive attitude toward labour was shown not only by intellectuals like Al-Isfahani[8] but also by Ikhwan Alsafa[9] (who were theologians) and the redoubtable Ibn Khaldun (d. 1406 AD).[10] Suﬁ arguments for work avoidance could also be refuted on the precept that Islam never asks its followers for ascetism. Instead, the Quran directs people to search for livelihood just after attending the Friday congregational prayers (62: 10), so it neither requires nor expects people to spend their whole time in the mosque. 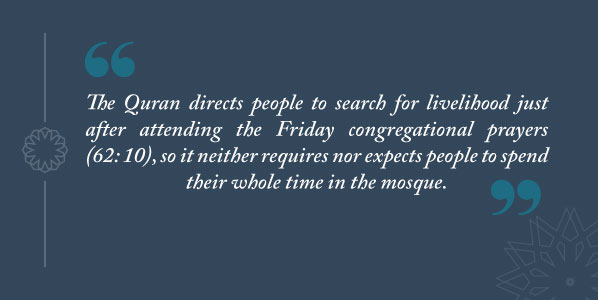 As we will notice in the following discussion, most of the injunctions in the Quran and Sunnah relating to a harmonious employer-employee relationship are forms of moral suasion. They can be analogized to the International Labour Organization (ILO) labour standards which are often criticized as “lacking teeth”—a simplistic view that underestimates the moral force of authoritative, universally acknowledged norms. However, it is essential to note that, ﬁrst, Islam encourages the state to play a role in regulating the labour market (as indicated in the establishment of the institution of Hisba), and second, these moral persuasions act as forceful legal injunctions concerning fundamental Muslim belief of the hereafter (al-akhirah). In this context, an individual is successful only if he is successful in the afterlife, and this success depends on whether one observed the moral standards encouraged by Islam.[11] Islam, like other Semitic religions, is an other-worldly religion where efforts and actions in this world will be fully rewarded or punished in the hereafter. This solicitude for the other world makes these moral persuasions stronger than mere legal injunctions. Islam does not deny the importance of legal provisions (instead, it encourages the role of the state); however, it takes the view that legal provisions without moral or ethical support have less signiﬁcance.[12] The current work is also an attempt to turn these moral suasions into legally enforceable provisions.

The current work is structured as follows. Chapter 2 identiﬁes sources of lawmaking in Islam as well as the role of government in employment relations and the critical institution of “Hisbah,” or oversight of compliance with Islamic teachings. Chapter 3 discusses rights and responsibilities at work and provides extensive citations from the Quran and hadith relating to labour and employment issues. Chapter 4 presents a comprehensive Islamic Labour Code, based on the teachings of Quran and Sunnah, with detailed provisions on substantive labour rights.

Though a work in progress, it is designed as a legal document, ready for use and adaptation by Governments. It can also be used by trade unions and other rights-based organizations to advocate for legislative and institutional reforms in labour-related matters in the light of Islamic teachings. Similarly, it can be used by progressive enterprises, aiming to embed Islamic teachings in their organizational policies and cultures. The ultimate aim of this work is to raise awareness among the masses, especially the practitioners of labour law, industrial relations, human resources as well as those working with the legislative bodies, about Islamic injunctions on individual and collective employment relations. While rooted in Islamic teachings, the work does not claim any religious sanctification and is well aware of its limitations.

[6] Islam provided many ways for emancipation of slaves, for example, spending the Zakat funds for emancipating slaves and the option of Mukatabat (24: 33).

[7] May Allah forgive us for all such instances, Amen.

[8] Raghib al-Isfahani (d.1109 A.D.). Isphahani also criticized Suﬁs while quoting an incidence at the time of second Caliph, Umar (RA) where the Caliph asked a pious man if he had a profession, and when his answer was negative, Umar (RA) did not approve it much and had a low opinion of him.

[9] Known as “Brethren of Purity.” It was the tenth-and eleventh-century secret brotherhood of philoso- phers and scientists who wrote Epistles of the Brethren of Purity and they gave a “doctrinal view to labor.” They were of the view that labor is sacred like God . . . because an artisan/laborer “creates new forms from the raw material which has no form, and in doing so, he incorporates and utilizes intelligence and thought.” Shatzmiller (1994, 380).

[10] Famous North African Islamic thinker, believed by many as the father of sociology. He was of the view that “Human labor is necessary for every proﬁt and capital accumulation . . . the capital a person earns and acquires, if resulting from a craft, is the value realized from his/her labor.” For a comparison between the above three scholars, see The Islamic Philosophy of Labor and Crafts: The View of the Ikhwan al-Safa’, Isfahani, and Ibn Khaldun by Mohamed, Y.

[11] Quran talks about losers in the following words, “Shall I inform you of the greatest losers in their actions? People whose efforts in the life of this world are misguided while they suppose that they are doing good (18: 103–04).”