Prohibition on Child and Forced Labour

[1] The Prophet (ﷺ) said: “Those who do not show mercy to our young ones and do not realise the right of our elders are not from us”. (Sunan Abi Dawud: 4943)

A fundamental principle in the employment relationship is kindness and compassion towards those who are dependent on the employer. The Prophet (ﷺ) said: “Allah Almighty will not show mercy to the person who does not show mercy to other people”. (Al-Adab Al-Mufrad: 370)

People are not even required to follow religion beyond their capacities. Therefore, children cannot be made to do work which is assessed as beyond their power. “Allah does not put under stress any soul more than its endurance”. (02:286)

Anas (RA) reported: “I served the Prophet (ﷺ) for ten years, and he never said to me, “Uf” (a minor harsh word denoting impatience) and never blamed me by saying, “Why did you do so or why did not you do so?” (Sahih Bukhari: 6038) 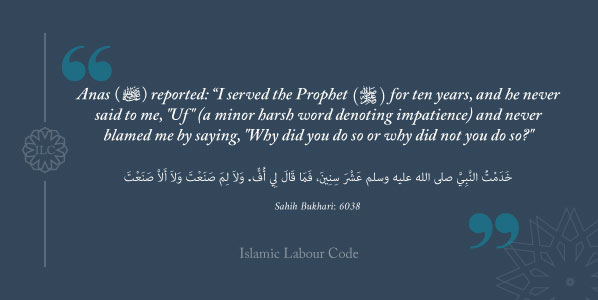 The believers are asked to ensure not only their safety but also the safety of their family. Though the verse relates to the hereafter, the scholars have interpreted it expansively. It is also parents’ responsibility not to engage a child in work which impacts his or health or education. “Believers! Safeguard yourselves and your families against a Fire whose fuel is men and stones”. (66:06)

[2] Since seeking knowledge is the primary duty of every person, it is assumed that the minimum age for employment should be same or higher than the compulsory education age. The Prophet (ﷺ) said: “Seeking knowledge is a duty upon every Muslim”. (Sunan Ibn Majah: Book 1, 224)

It is the responsibility of parents and state to ensure that children complete their education and start working full time only after that. The Prophet (ﷺ) said: “It is a sufficient sin for a man that he neglects him (those) whom he maintains (is supposed to take care of)”. (Sunan Abi Dawud: 1692)

“All of you are guardians and responsible for your wards and the things under your care.” (Sahih Bukhari: 893)

[3] Even for Jihad (the Holy war), the Prophet (ﷺ) did not allow children to participate: “Ibn e Umar related the following: Allah’s Messenger (ﷺ) called me to present myself in front of him or the eve of the battle of Uhud, while I was fourteen years of age at that time, and he did not allow me to take part in that battle, but he called me in front of him on the eve of the battle of the Trench when I was fifteen years old, and he allowed me (to join the battle).”

Nafi` said, “I went to `Umar bin `Abdul `Aziz who was Caliph at that time and related the above narration to him, He said, “This age (fifteen) is the limit between childhood and manhood,” and wrote to his governors to give salaries to those who reached the age of fifteen”. (Bukhari: 2664)

In another narration, the Prophet (ﷺ) ordered not to kill children and non-combatant workers/servants during the war. (Sunan Kubra Nasai: 7395)

[5] The Prophet (ﷺ) instructed the following: “Be kind to your children, and perfect their manners”. (Sunan Ibn Majah: 3671)

[6] Engaging someone in forced labour ins prohibited in Islam. “The Prophet (ﷺ) said, “Allah says, ‘I will be against three persons on the Day of Resurrection: -1. One who makes a covenant in My Name, but he proves treacherous. -2. One who sells a free person (as a slave) and eats the price, -3. And one who employs a labourer and gets the full work done by him but does not pay him his wages”. (Sahih Bukhari: 2227).

Forced labour includes both aspects: selling a person as a slave and not paying a person their due wages.

The Prophet, at another occasion, said: “Beware, if anyone wrongs a contracting man, or diminishes his right, or forces him to work beyond his capacity, or takes from him anything without his consent, I shall plead for him on the Day of Judgment”. (Sunan Abi Dawud: 3052)

Quran, while quoting the conversation between Musa (AS) and Shuaib (AS) indicates the tributes of a good employer: “And I do not want to make it hard for you. If Allah wills, you will find me of the pious”. (28:27)

The Prophet (ﷺ) spoke of the master and worker relationship in the following words: “Those who work for you (your slaves) are your brethren upon whom Allah has given you authority. So, if one has one’s brethren under one’s control, one should feed them with the like of what one eats and clothe them with the like of what one wears. You should not overburden them with what they cannot bear, and if you do so, help them (in their hard job)”. (Sahih al-Bukhari: 2545)

“The last words of the Messenger of Allah (ﷺ) were: “Prayer, prayer! And fear Allah about what your right hands possess, i.e., your workers”. (Musnad Ahmad: 585)