Hiring the Best Person for Job

Islam constrains employers to recruit, select, and promote workers based on merit. It decries favouritism and nepotism and any type of discrimination. The Quran has given a clear and straightforward rule for hiring a worker; “the best of men for you to hire is the strong (competent) and the trustworthy” (28: 26).

We ﬁnd similar view in the tradition of the Prophet (ﷺ) where he said that “if you give a job to someone who is not knowledgeable, just wait for the destruction.” In another hadith, the Prophet (ﷺ) warned that “whoever is appointed to manage the affairs of a Muslim community, and then he appoints someone based on nepotism, he will therefore be condemned by Allah.”[1]

Islam considers it the duty of the employer to look for the best available worker. In the words of Umar (RA), “If a person of lesser ability is appointed when a better one is available, then his action would be tantamount to betraying God, Prophet (ﷺ) and the people.”[2]

Islam also requires the employer not to discriminate against people whom he dislikes (05: 08) and requires him to treat all employees or applicants equally.

Ali (RA), in his famous epistle to the governor of Egypt, said, “Never select men for responsible posts either out of any regard for personal connections or under any inﬂuence, for that might lead to injustice and corruption. Do not underestimate and underpay the good work done. Similarly, do not overpay a work simply because it has been done by a very important person and do not let his position and prestige be the cause of overvaluation of the merit of his work. At the same time, do not undervalue a great deed if it is done by a very ordinary person or a commoner. Let equity, justice and fair play be your motto.”[3] 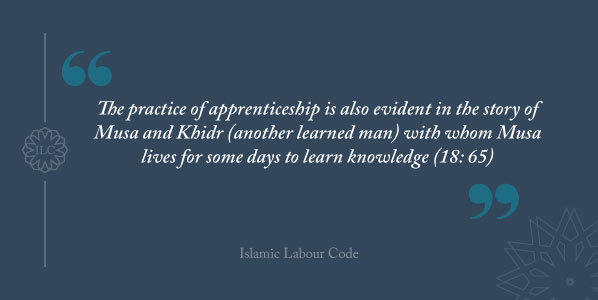 Keeping in view Islam’s focus on knowledge and learning,[4] an employer is required to provide the employee with the necessary training to succeed at the job. Islam supports the apprenticeship model of learning. The practice of apprenticeship is also evident in the story of Musa and Khidr (another learned man) with whom Musa lives for some days to learn knowledge (18: 65).[5]

[1] “Whoever is appointed in charge of any affairs of the Muslims and appoints over them anyone by way of favouritism, the curse of Allah be upon him and Allah will not accept any obligatory or nafl prayer from him until he admits him to Hell. And whoever allows anyone to transgress the sacred limits set by Allah has transgressed the sacred limits of Allah unlawfully, and on him will be the curse of Allah and Allah will forsake him”. (Musnad Ahmad: 21)

[4] “The seeking of knowledge is obligatory upon every Muslim”. (Mishkat al-Masabih: 218)

[5] Hierarchy in the ﬁfteenth century guilds also shows that these followed the apprenticeship model.