Hours and Conditions of Work

Islam is of the view that worker should not be overburdened with work. If the worker is asked to work for more hours or work beyond his or her capacity, the employer must provide the necessary help. The Quran says that “God only assigns a soul something that it can cope with” (02: 286), and while telling the story of Musa and Shuaib, the employer (Shuaib) tells Musa that “I don’t want to be hard on you (by placing more burden of labour on you) and you will ﬁnd me an honourable man if Allah so wishes” (28: 27). Analyzing the above two verses, it is clear that the fundamental rule is not to overburden an employee, pursuing the logic that because Allah, who has absolute authority over human beings (being their Creator), does not overburden people in following His commandments, then fellow beings, to gain righteousness and honour, must treat their subordinates or employees with compassion.

We ﬁnd a similar approach in the following hadith: “Your servants are your brothers whom Allah has placed under your authority. Whosoever has one under him, should feed him of what he eats, clothe him of what he clothes himself, and must not burden him beyond his capacity/ability. But if you do burden them beyond their capacity, then help them.”[1] 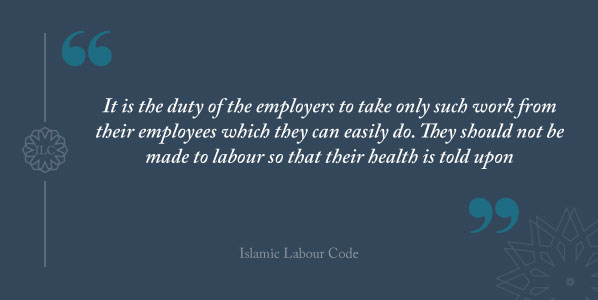 Manazir Ahsan Gilani, a leading Islamic scholar, is of the view that the phrase, “and must not burden him beyond his capacity/ability” should be used in determining the duration and nature of work. It is clear from the above hadith that an employee cannot be assigned work which takes a longer than normal period of time or what is beyond his or her capacity. If the work demands overtime, then the employee needs to be compensated for overtime (and in this way, he or she would be helped). However, excessive overtime and overburdening a worker may be hazardous for a worker’s health, and anything counterproductive cannot be supported beyond normal limits.[2] According to another hadith, giving light work to subordinates will be rewarded on the Day of Judgment.[3]

We also ﬁnd reference of safe working conditions (hygienic, without any hazards) both in the Quran and hadith. The Quran says “yet don’t expose yourselves to ruin through your own hands. Do good; God loves those who act kindly” (02: 195). This verse refers to the provision of safe conditions in a workplace by the administration. There is also a hadith reported by Ibn Hazm that the Prophet (ﷺ)said, “It is the duty of the employers to take only such work from their employees which they can easily do. They should not be made to labour so that their health is told upon.”[4] Another tradition has it that “don’t burden your worker with the work that he or she cannot endure.”[5]

The Quran also provides general guidelines on rest and leisure and considers it a fundamental right (28: 73; 33: 53). We ﬁnd reference in Ahadith that the Prophet (ﷺ)said, “Man owes something (of his labour and energies) to himself, something to his body, something to his wife (family), something to his eye (psychic or aesthetic satisfaction).”[6] From the above references, it is clear that Islam regards leisure and rest as one of the core rights of workers. There is no religious injunction against lawful recreation and enjoyment, as is evident in this hadith (Allah loves to see the sign of His bounties on his creatures)[7], which encourages people to spend money and enjoy their lives. As far as the practical application of this principle is concerned, paid leave of absence was given at least once or twice a year to the troops stationed at far-off places. Umar (RA) had issued standing orders that no soldier should be compelled to stay away from his home/family for more than four months.[8]

[2] Quran has speciﬁed a rule that sometimes a seemingly good work may produce negative results, which means that this type of work should not be pursued, because what is important is the end result (06: 108).