Work ethic is a combination of ideas and assumption about the necessity of work (why it should be done), people’s beliefs about this necessity of work, and how they are persuaded to do some work.[1] Work ethic is linked to job satisfaction and organizational commitment. It also shows the individual’s attitude toward work, i.e., preference for activity and involvement, attitudes toward monetary and nonmonetary rewards, and the desire for upward career mobility, all of which are highly relevant to modern analysis of the employment relationship in a market economy. 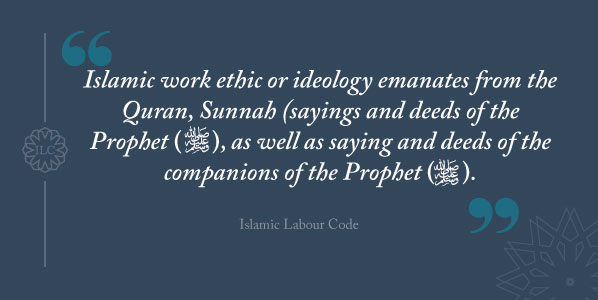 Islamic work ethic or ideology emanates from the Quran, Sunnah (sayings and deeds of the Prophet (ﷺ), as well as saying and deeds of the companions of the Prophet (ﷺ). The Quran expresses its work ethic in the following words: “And there is nothing for a person except what he strives for” (53: 39).[2] In another verse, the Quran treats work as a source of honour (Say: Work and Allah will see your work [09: 106]).

The Prophet (ﷺ) stressed that hard work in earning the income to support one’s family leads to the atonement of sins[3] and that the “best earnings are those that are earned by a person through his own hands”.[4] In the same tone, Umar (RA), the companion and the second Caliph, expressed that “it is quite unbecoming of a Muslim not to make due effort to earn his bread and butter and simply praying that God grant him food.”[5]

The seeking of halal (legitimate) earnings is a duty after obligatory prayers and other duties, in line with a hadith.[6] Although it is not one of the ﬁve pillars of Islam, work is a duty for all people, and it is a kind of worship (ibadah) (Who is better in speech than one who calls [men] to God and works righteousness, 41: 33). Islam has no room for asceticism, and complete devotion to worship does not constitute a valid reason for not working. The Prophet (ﷺ) once saw a man worshipping in the mosque all the time. He asked who was ﬁnancially supporting this person and people replied that some of them were helping him. He said that those people assisting the worshipper were better than him.[7] Work is also regarded as a form of Jihad (holy war), and a person who works hard to make provisions for his children, old parents, or who earns a living for him or herself is considered a mujahid in the way of God.[8]

Compared with hard work, inertia or parasitism is highly frowned upon and disliked in Islamic literature. Islam persuades people to give charity while on the other hand calls for hard work as mentioned in a hadith that “It is better that a person should take a rope and bring a bundle of wood on his back to sell so that Allah may preserve his honour than that he should beg from people (regardless of) whether they give him or refuse him.”[9] In some other hadith, the Prophet (ﷺ) said that charity is not legitimate for an able-bodied person.[10] 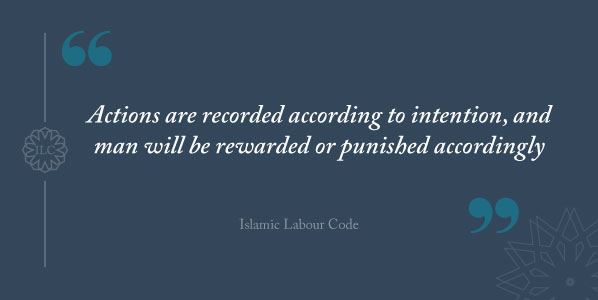 Islam also allows for migration or change of workplace if work is not available locally. In a hadith, the Prophet (ﷺ) asserted that people are allowed to migrate to other countries in search of livelihood or family welfare. This is also supported in a verse of the Quran (04: 97–100). From this verse, it appears that Allah appreciates migration for one’s betterment (whether it is spiritual or worldly because Islam does not differentiate between theological and secular activities). Migration may also become a necessity for some when one’s life and beliefs are in danger.

The logic behind work in Islam is to achieve self-reliance and self-sufficiency. As the below-mentioned ahadith show, Islam asks people to have pride in their work even when they are receiving little in remuneration. In another hadith, we ﬁnd out that the Prophet (ﷺ) emphasizes the importance of earning and then giving examples that even Prophets (AS) earned for themselves. 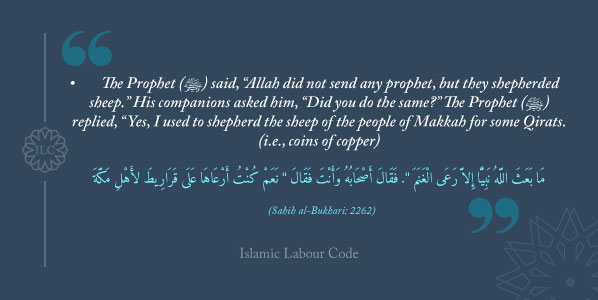 Despite all this emphasis on hard work, Islam still focuses on the importance of the hereafter. The belief is that the actual reward of efforts will be given only in the afterlife and not necessarily in this world. Moreover, Islam focuses more on intentions and hard work than on results, as recorded in a tradition of Prophet (ﷺ) “actions are recorded according to intention, and man will be rewarded or punished accordingly.”[14] For example, the real punishment for lousy treatment of workers would be in the hereafter.[15] However, the state is required to make rules to provide these protections to workers.

[2] This theme is repeated in another verse, “There is guaranteed share for those who seek and endeavour” (41: 10)

[5] At another occasion, Umar said “to die while striving in my work hoping for the bounty of God is even better to me than being killed in the Holy war for the sake of God” (al-Shaibani) (Quoted from El-ashker and Wilson (2006, 107).

[14] “The reward of deeds depends upon the intentions and every person will get the reward according to what he has intended.”      (Sahih Bukhari: 1)

[15] The Prophet (ﷺ) is quoted as saying: “Those who ill-treat their employees will ﬁnd the paradise gates shut to their faces”.   (Majma Uz Zawaid)

The Messenger of Allah (ﷺ) said: “No one who mistreats his slaves (workers) will enter Paradise. A man said: O Messenger of Allah (ﷺ), didn’t you tell us that this ummah is the greatest in numbers of slaves and orphans? He said: `Yes, so treat them kindly as you treat your children and feed them from what you eat. They said: What could benefit us in this world, O Messenger of Allah? He said: “A good horse which you keep ready for fighting for the sake of Allah and a slave to take care of you. If he prays (becomes Muslim), then he is your brother, if he prays, then he is your brother.” (Musnad Ahmad: 75)

PrevBackLabour Rights in the Quran and Sunnah
NextWagesNext
error: Content is protected !!