The proponents of Islamic economic and ﬁnance systems have written extensively on the establishment of proﬁt sharing or stock ownership schemes in ﬁrms.[1] We ﬁnd that Islam allows joint ventures between two parties where one party provides the capital and the other provide labour or services, and proﬁts are divided as agreed beforehand (called Modaraba, it is a speciﬁc form of partnership or Mosharakah).[2] This form of a business partnership is also referred to as Commenda. It can also include labour-only partnerships where the only investment is the skills that labourers have.[3] Chapra (1983) has argued that “proﬁt may be divided into two parts: bonuses and other beneﬁts, where the latter can be used for improving working conditions and providing training to workers, allowance for children’s education and food subsidies”. These beneﬁts can also include retirement and health beneﬁts, as well as paid vacations, which can positively affect workers’ motivation and job satisfaction.

We ﬁnd explicit references in ahadith of the Prophet (ﷺ) in which employers are required and persuaded to share the produce and proﬁts with the workers. In one instance, it is related “If your servant prepares food for you and brings it to you, he has undergone the torment and agony of smoke and heat. You should, therefore, ask him to sit and participate in the food. If you have guests, then reserve some of the food for the servant, at least a morsel or two”,[4] and at another place, the Prophet (ﷺ) said: “Pay the workers part of the food grains produced through their efforts; labour as the servant of God cannot be deprived of the produce”.[5] In both of the above cases, we ﬁnd a simple and straightforward rule that a ﬁrm has to share the proﬁts with its employees. The idea of a bonus is enshrined in the above-quoted ahadith.[6] We also infer another principle from the ﬁrst hadith that if the employer is not earning much proﬁt, he should still give workers a share in the proﬁts. 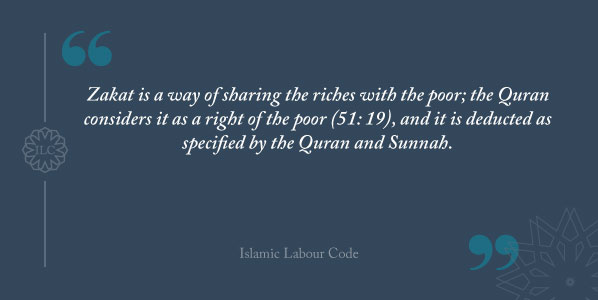 Moreover, as argued by Zulﬁqar (2007), the concept of proﬁt sharing is also present in the obligatory pillar of Zakat (poor tax). Zakat is a way of sharing the riches with the poor; the Quran considers it as a right of the poor (51:19), and it is deducted as speciﬁed by the Quran and Sunnah. The more a person contributes to society through labour or capital, the less he or she gets taxed, and less proﬁt is shared among the masses.

[2] For more on this, please see Partnership and proﬁt sharing in Islamic Law by Muhammad Nejatullah Siddiqi and An introduction to Islamic ﬁnance by Muhammad Taqi Usmani.

[6] The Messenger of Allah (ﷺ) said, “When your servant brings food for you and you do not seat him with you, you should at least give him a morsel or two out of it because he has prepared it himself”. (Riyad as-Salihin: 1361)